Posted at 14:12h in UNE Research by verso 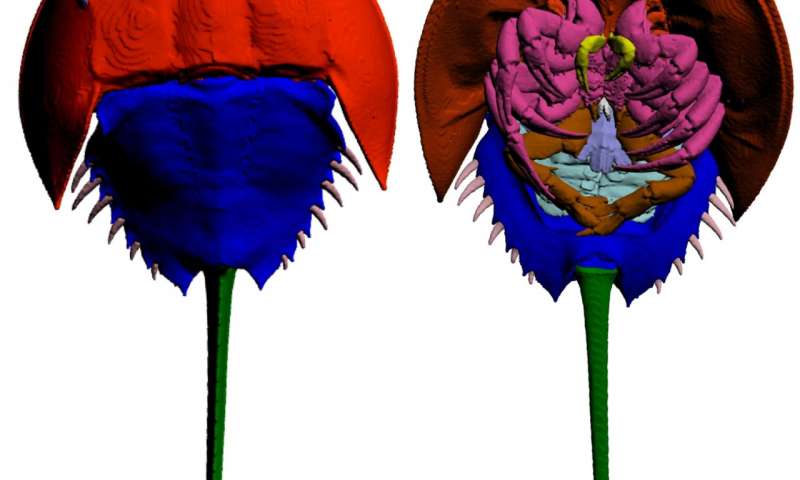 State-of-the-art technology is being used at the University of New England (UNE) to unlock the secrets of creatures that lived long before the age of dinosaurs. And it’s a modern-day “fossil” – the bizarre horseshoe crab – that holds the key.

The arthropod has an ancient lineage and is thought to share many features with the first living organisms. By creating three-dimensional models of muscles taken from a fresh specimen and a dried horseshoe crab carcass held in UNE’s Natural History Museum, new collections manager Russell Bicknell and his colleagues are learning how early animals might have moved and fed.

“The horseshoe crab is a particularly good modern analogue, or comparison, for a lot of arthropods in the fossil record, and we’re able to apply our understanding of its muscles to that of fossil species,” Russell said. “The horseshoe crab has these things called gnathobases, which are like teeth on its legs, and it squeezes its legs together to chew. We think extinct arthropods that lived in the Cambrian period (541-485 million years ago) had similar feeding muscles to the horseshoe crab, and ate and moved the same way.”

The team’s findings offer fresh insights into evolution (or in the case of the horseshoe crab, how little has changed) and it now plans to use other specimens in the museum collection as proxies for creatures that lived in the Cambrian.

“This potentially turns our collection into a really important research tool, which could significantly extend UNE’s outreach,” Russell said.”It puts the collection at the heart of our institution, and if we begin to use it more as a research facility, then we are more likely to attract researchers.”

Russell and his team discovered two additional muscles in the horseshoe crab courtesy of the micro-computer tomography models – one in its pushing leg and another in the male pedipalp (a second pair of appendages attached to the head and thorax). This brings to at least 115 the number of distinct muscle groups identified in the animal.

“That’s a lot for an arthropod, but then this is a really weird animal,” said Russell, who is studying predation in the Cambrian period as part of his PhD. “I love working on them and trying to understand them, and I have grown to love the UNE collection.

“It’s exciting to think that this finding brings us one step closer to creating a digital record of early life on Earth.”

The team’s study on the horseshoe crab will be published this week in the open-access journal PLOS ONE.
Russell spoke at UNE’s recent Postgraduate Conference about how new technologies are allowing researchers to ask new questions of old zoological specimens.