Posted at 09:23h in Specimen of the month by verso 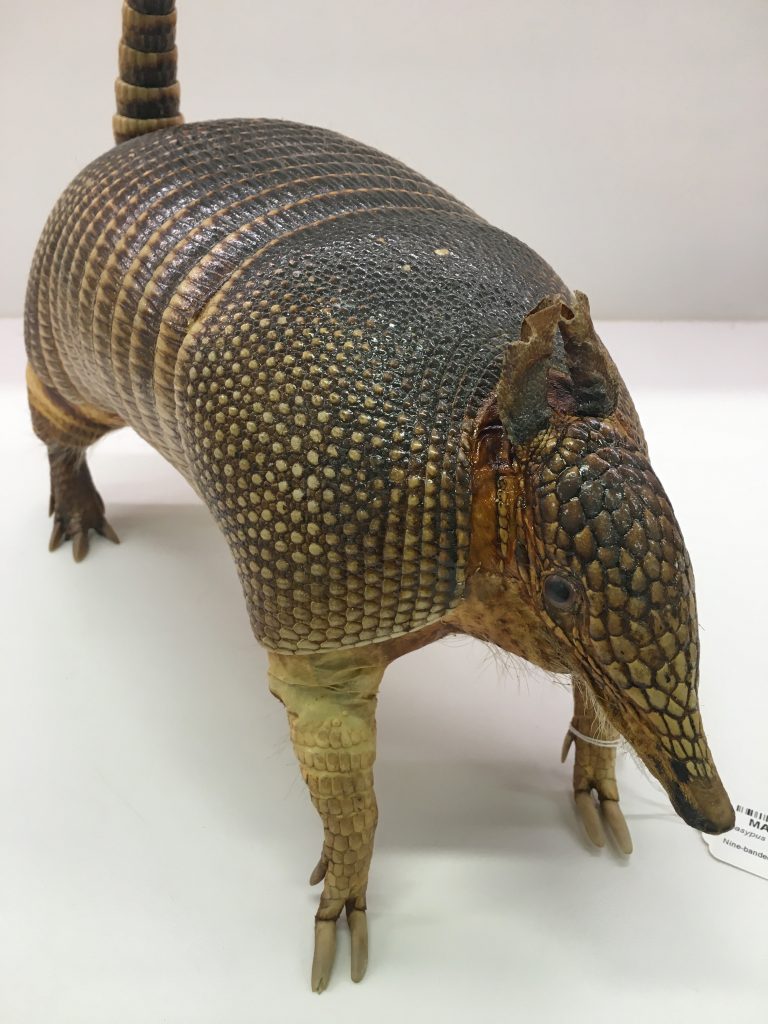 This month’s Specimen of the Month has been written by our eager intern, Mae White. Mae joined us in the museum as part of the UNE GRASS Industry Placement Scholarship in January 2021.

This month we will look at the Nine-Banded Armadillo, scientifically known as Dasypus novemcinctus. The name translates from Greek to nine-banded (novem: nine, cinctus: bands) turtle-rabbit (Dasypus). Contrary to its name the nine-banded armadillo can have 8-11 movable bands across its back, forming part of its signature armour plating of ‘osteoderms’ made from keratin. This species can be found in Argentina, Uruguay, through central America and Mexico. Nine-banded armadillos are nocturnal or crepuscular, however they can be found foraging for food during daylight in cold and cloudy weather. They rely on their sense of smell when searching for food. Their diet consisting mostly of insects, however, they are omnivorous and also eat snails, birds, eggs, berries, worms and small amphibians. Nine-banded armadillos are burrowing animals, using their nose and forefeet to dig, and their hind feet to kick loosened soil from the burrow. They then bring leaves, twigs and dead grass into their burrow as nesting material. Their heavily armoured bodies protect them from predators and their short, tapered tail is difficult for predators to grab. Comically – they are also known to jump straight up in the air when startled. We have several armadillos in the collection, including a seven-banded armadillo (Dasypus septemcinctus) from South America which was collected by museum staff in the 1960s.

Interesting Fact: Other than humans, nine-banded armadillos are the only mammal in which lepromatid leprosy occurs naturally, hence these animals are of crucial importance to medical research.