10 May The Parma Wallaby

Posted at 14:00h in Specimen of the month, UNE Research, Zoology by verso 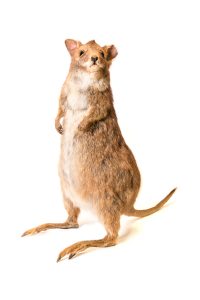 The story of the loss and rediscovery of Notamacropus parma or Parma Wallaby is an interesting one. After the arrival of foxes and cats in New England, many mammals became threatened, and some were sent to extinction. Scientists thought that the Parma Wallaby had been lost forever until wildlife managers in New Zealand found a small population that had been introduced to an offshore island in the 1800s by the then Governor of New Zealand, Sir George Grey.

Armed with the knowledge of what a living Parma looked like, Macquarie University PhD student Dr Gerry Maynes mounted several expeditions to search for the wallaby in the forests of New South Wales – where he rediscovered them, living in scattered populations from the Queensland border to just north of Sydney. The wet eucalyptus forests and rainforests on the eastern edge of the New England region is considered the stronghold of this endangered marsupial.