15 Jan Portrait of a Rhesus macaque

Posted at 09:51h in Specimen of the month, UNE Research, Zoology by Discovery 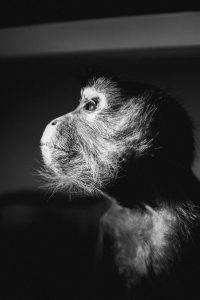 Looking at a primate specimen, such as this mounted specimen of a rhesus macaque, is a bit like looking into our human past, and perhaps a bit of the present too; macaques eat a mix of plant and animal material, are good climbers and swimmers, but spend a lot of time on the ground – and they are highly social, living in noisy, active troops … sound familiar? Rhesus macaques in particular, also have an important history with humans – they have played a huge role in medical and scientific research – for example, antigens in the blood of rhesus macaques has allowed medical researchers to identify the different human blood groups. And if you though humans were the first primates in space, then guess again – it was a rhesus macaque by the name of ‘Albert II’, who made it into low earth orbit in 1949. In 2001, in another first, a rhesus macaque named ‘Tetra’ became the first cloned primate.

In late 2017, UNE students visiting Bhutan were fortunate to make field observations on a related species, the Assamese macaque.

Rhesus macaques are native to South, and South-east Asia, including India, Bangladesh, Pakistan, Nepal, Burma, Thailand, Afghanistan, Vietnam, southern China, and Bhutan. In late 2017, UNE students visiting Bhutan were fortunate to make field observations on a related species (the Assamese macaque, Macaca assamensis) – one thing they learned quickly is to not get too close to wild macaques; the males in particular can be very aggressive and defend their troop with ferocity.