02 Apr Story of the horns

Posted at 09:11h in UNE Research, Zoology by verso 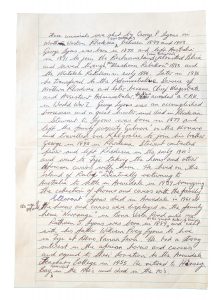 Handwritten notes (pictured) by Dr Patrick Watters detail the history of the horns, excerpt of his letter transcribed directly from his letter:

These animals were shot by George P Lyons in North Western Rhodesia (now Zambia) between 1899 and 1903. George Lyons was born in 1872 and left Australia in 1891 to join the Bechuanaland (now Botswana) Mounted Police and served through the Mashona Rebellion in 1893 and the Matabele Rebellion in early 1896. Later in 1896 he transferred to the Administrative Service of Northern Rhodesia and later became the Chief Magistrate and Assistant Administrator. He was awarded a C.B.E. in World War 1.

George Lyons was an accomplished horseman and a great hunter and died in Rhodesia.

Stewart G Lyons was born in 1877 and left the family property ‘Gilmore’ on the Monaro and travelled via Kalgoolie to join his brother George in 1895 in Rhodesia. Stewart contracted fever and left Rhodesia in the early 1900’s and went to Fiji, taking the horns and other African curios with him. He lived on the island of Rabi in Fiji eventually returning to Australia to settle in Armidale in 1939 bringing the collection of horns and curios with the family.

Stewart Lyons died in Armidale in 1961 at the age of 84 and the horns and curios were displayed in the family home ‘Narrangi’ in Bona Vista Road until 1955. Ruthren S. Lyons was born in 1889 as the youngest brother of George and went with his father William Percy Lyons to live in Fiji at Devo, Vanua Levu. He had a strong interest in the African horns and curios and agreed to their donation to the Armidale Teachers College in 1955. He retired to Hervey Bay, Queensland, in the 1960’s and died in the 70’s.